Some people talk a lot about making a difference. Patricia Hart is doing it.

Hart is one of the founders of Inspire to Aspire, a mentorship program providing support to young men at Beverlye Intermediate School. The program holds sessions once a week to allow volunteer mentors to speak to the students about issues such as making good choices, self-esteem, conflict resolution and other challenges teenagers face. 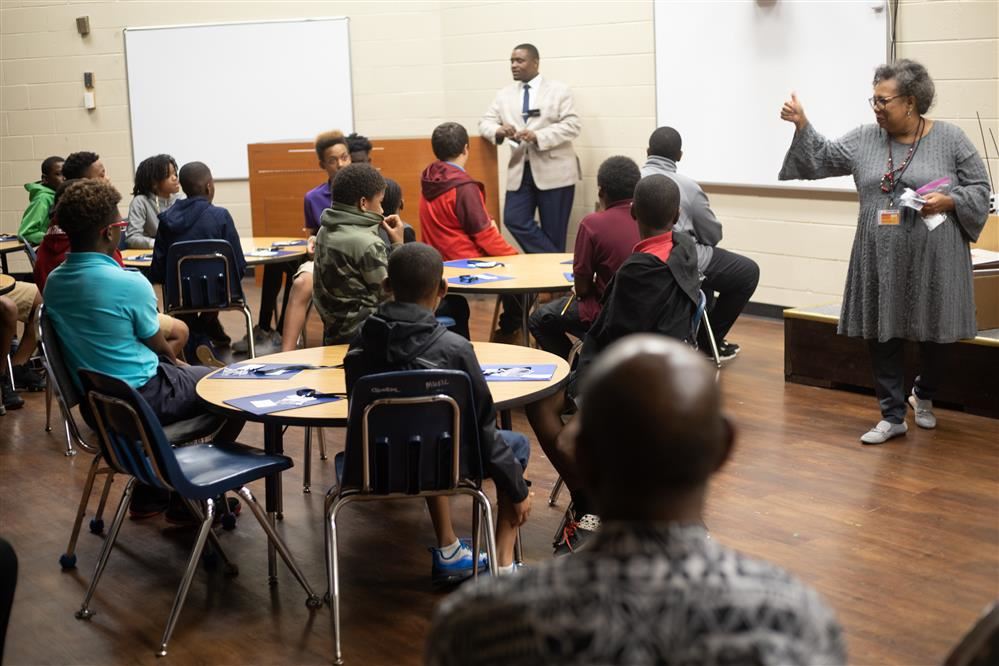 “We need to address these problems now instead of pushing them away,” Hart said. “If we want our children to have a prosperous future, we need to start talking to them now.”

The mentors participating in the program – largely drawn from a group of retirees – have surprisingly made real connections with the student they are working with. A recent session began with one of the students walking up to Hart and giving her a hug.

“A lot of it is just building them up,” Hart said. “Many of them don’t get as much praise as they should get. I want to show them that we have confidence in them.”

Presidente Jones, a student in the program, said, “I like that they spend time with us, trying to teach us to do right.”

Veterans play a big role in the program, as retired members of the military command almost automatic respect from young men in many communities like Dothan.

Melvin Hart, Patricia’s husband, and Robert Durr are veterans participating in the program. Hart and Durr said they try to share some of the things they learned in the military with students – courtesy, the value of a job done well, and self-discipline.

Melvin said many young men don’t have enough positive male influences in their lives. That’s where he and Durr try to contribute.

“Kids that age need a lot of attention, and many of them aren’t getting it,” Durr said.

Patricia Hart said that she can see evidence that the program is making an impact, and that the encouragement and positive reinforcement her fellow mentors provide is convincing students to make the right choices.

“We had a young man who said he just couldn’t change, he just couldn’t do better,” she said. “I told him we weren’t giving up on him. At a participation event where we were rewarding students with good behavior, I gave him a gift card and told him I was trusting him to do better. From that day forward, he did change.”

Hart’s program is just one of several mentoring programs making a difference in the Dothan City Schools. According to Beverlye Intermediate School Principal James Williams, mentors don’t have to be millionaires or famous, mostly, they just have to believe in students’ ability to succeed.

“Having people who invest in students and care about them can make a powerful difference,” he said.

Click the below video to hear more about how mentors from the community are impacting our students.